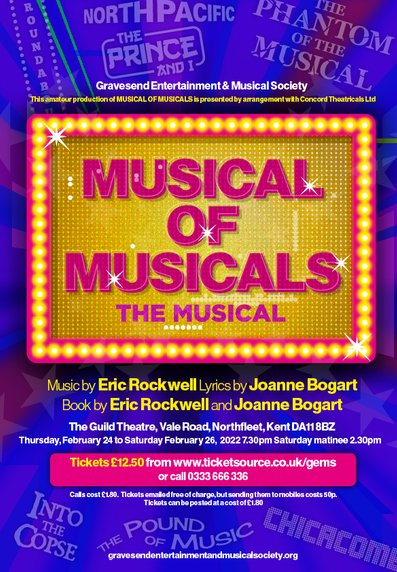 *Chorus – Any age or gender.

*Dancers - Any age or gender.

Please contact us if you would like any further information or come along to a rehearsal to find out more.

“A Musical of Musicals” (the Musical!) is a musical about … musicals. In this hilarious satire of Musical Theatre, one story becomes five delightful musicals, each written in the distinctive style of a different master of the form.

The five musicals within the musical, as presented in two acts, are:

Corn! is set in the style of the musicals of Rodgers & Hammerstein, featuring parodies of and references to Oklahoma!, Carousel, The Sound of Music, The King and I, Cinderella, Flower Drum Song and South Pacific. In Kansas in August, Jitter threatens that June will have to marry him if she can't pay the rent; Big Willy is torn between his desire to marry her himself and his desire for the freedom of his carnival-barker lifestyle, and Mother Abby advises her to "follow her dream", leading to a lengthy dream ballet and a happy ending.

A Little Complex is based upon the musicals of Stephen Sondheim (Into the Woods, Company, Sweeney Todd: The Demon Barber of Fleet Street, A Little Night Music and Sunday in the Park with George, et al.). In a New York apartment complex full of neurotics, Jitter is a mad artist/landlord who plots to murder his tenants, including bird-obsessed, indecisive Jeune, deep-thinking composer Billy and pessimistic alcoholic Abby, for throwing his artwork out with the trash. After many overly-complex lyrics and dissonant music, he does.

Dear Abby parodies the work of Jerry Herman, especially Mame, Hello, Dolly!, La Cage aux Folles and Dear World. Aunt Abby is an unconventional Manhattan socialite, adored by her neighbours, and her advice solves everyone's problems. In between costume changes, Abby manages to matchmake her nephew William and her geeky friend Juney-Fae and convince the stuffy Landlord Mr. Jitters to embrace his true self and become a drag queen. Much dancing follows.

Aspects of Junita plays upon the work of Andrew Lloyd Webber, including The Phantom of the Opera, Evita, Jesus Christ Superstar, Sunset Boulevard,  Cats,  Joseph and the Amazing Technicolor Dreamcoat and Starlight Express. In this sung-through pop opera, Junita hopes that becoming a superstar, despite her lack of talent, will allow her to get out of paying her rent from the mysterious Sir Phantom Jitter. As her boyfriend Bill bemoans the lack of communication in their relationship (due to the fact that they literally cannot talk), and fading diva Abigail von Starr advises her to go over the top, Junita falls under Phantom Jitter's spell, only for an errant Chandelier to bring things literally crashing down to a spectacular climax.

Speakeasy reflects the work of John Kander and Fred Ebb, chiefly  Chicago,  Cabaret, Kiss of the Spider Woman and Liza with a Z. In a speakeasy in 1930s Chicago, where half the characters are German, Fräulein Abby advises Juny to turn to prostitution to pay her rent; her boyfriend, Villy, is both gay and in jail, and is of no help; and the activity is presided over by the creepy emcee/landlord Jütter. All sing about how depressing life is and dance around in skimpy clothing.

After the end of "Speakeasy", the cast concludes the show by singing "Done", a parody of the song "One" from the musical A Chorus Line